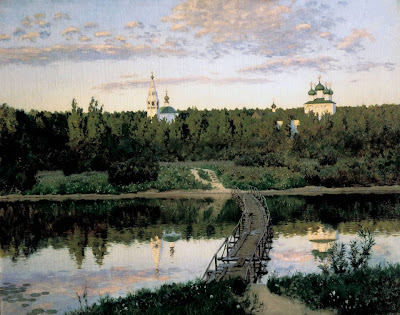 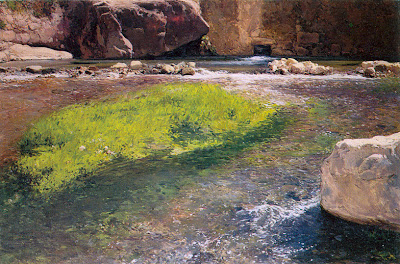 Email ThisBlogThis!Share to TwitterShare to FacebookShare to Pinterest
Labels: rivers


After a long period during which his work was neglected and misunderstood (it was even associated with Nazism at one stage) Caspar Friedrich is now appreciated as a major figure in landscape painting, and perhaps the most important German painter of the Romantic period. His landscapes are unique, not only because they draw from a deep contemplation of Nature but because they reflect an inner world of eternal values.

Friedrich wrote a collection of aphorisms communicating his insights into painting. Here are some of them:

"Close your bodily eye, that you may see your picture first with the eye of the spirit. Then bring to light what you have seen in the darkness, that its effect may work back, from without to within."

"If he sees nothing within, then he should stop painting what is in front of him."

The painter should paint not only what he has in front of him, but also what he sees inside himself.

"What the newer landscape artists see in a circle of a hundred degrees in Nature they press together unmercifully into an angle of vision of only forty-five degrees. And furthermore, what is in Nature separated by large spaces, is compressed into a cramped space and overfills and oversatiates the eye, creating an unfavorable and disquieting effect on the viewer."

"The pure, frank sentiments we hold in our hearts are the only truthful sources of art. A painting which does not take its inspiration from the heart is nothing more than futile juggling. All authentic art is conceived at a sacred moment and nourished in a blessed hour; an inner impulse creates it, often without the artist being aware of it."

The Russian writer Aleksandr Turgenev wrote of Friedrich in his diary:

We visited Friedrich's atelier today. Listening to him and seeing his paintings was wonderful. He has some bonhomie which pleases people and his paintings reveal his romantic imagination. As a rule, he expresses in them one thought or feeling, though vaguely. You may meditate over his paintings but not have a clear understanding of them, for they are vague even in his soul. They are dreams or daydreams. He often employs very simple natural things, such as an ice block floating on sea waves, a few trees in a dale, window of his room (facing the beautiful Elbe), knight meditating over ruins or tombstones, monk staring into the distance or below his feet: all this captivates your soul, plunges you into dreams, all invokes your imagination, powerfully though vaguely.(6 August 1825)
Posted by jeronimus at 7:42 PM No comments: